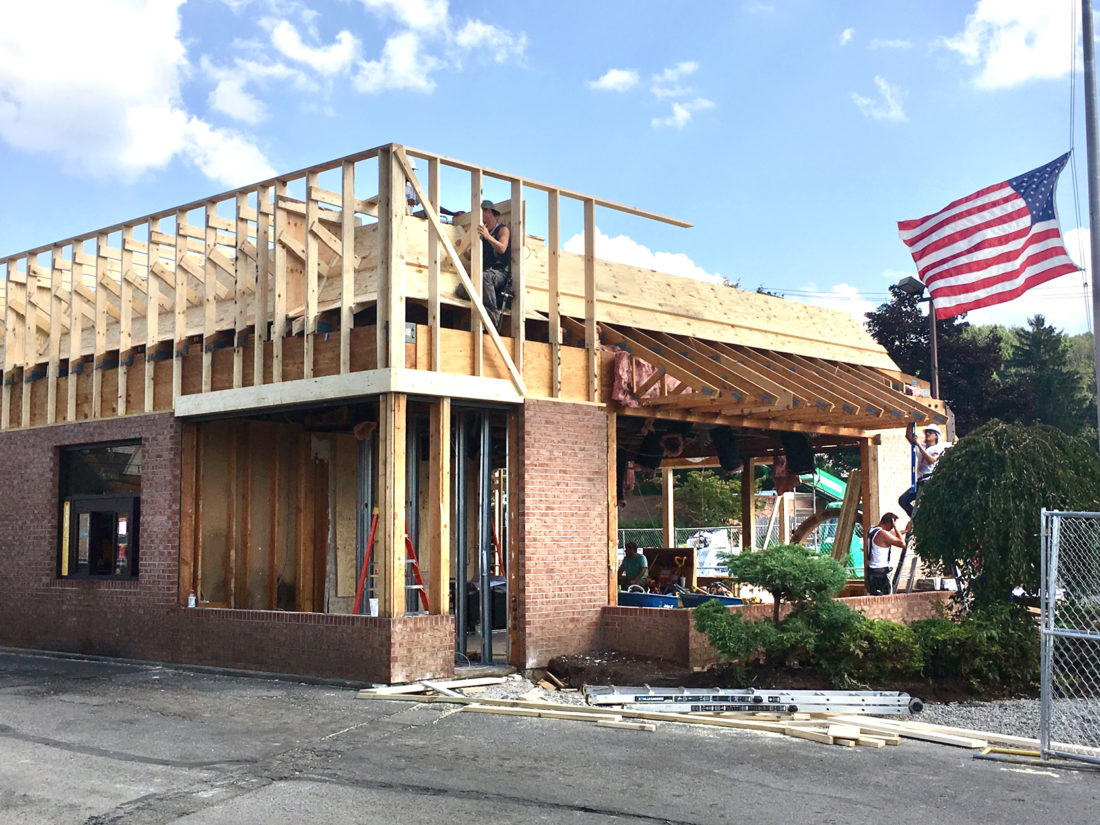 Morning Journal/Katie White A major remodeling project is under way at the East Palestine McDonald’s.

EAST PALESTINE — Don’t worry, you can still have your break today.

The McDonald’s drive-thru on South Market Street remains open as the building undergoes renovations to fall in line with a company upgrade.

Local owner Steve Telischak said the work began a week ago and the construction company is hoping to have the project finished by Sept. 15.

He said the overall company goal is to modernize each McDonald’s restaurant across the country for what the company is calling a bigger, better, bolder, 2020 vision, referring to the date it hopes to have all upgrades completed.

Telischak has been a McDonald’s franchise owner since 1981 — back when some restaurants still featured the Ronald McDonald’s statues and outdoor play places.

He remembers when the Chicken McNugget was first introduced.

“I have seen everything,” he said.

He said the local restaurant will have one new digital self-order kiosk inside and an all-new look on the outside. A new dining room, new bathrooms and new counter area will also included in the project.

“They are making it look more modern, up to date,” Telischak said.

While sticking with a modern look that is similar across locations, each restaurant has about three different variations on the exterior appearance.

For example, the McDonald’s in Lisbon is a dark gray color while the Salem McDonald’s is more of a brown. Both are owned by Telischak

What look the East Palestine restaurant will feature remains unknown at this point.

According to a statement on the McDonald’s company website, East Palestine is one of 380 restaurants in Ohio to undergo renovations as part of a $251 million investment in the state.

McDonald’s and its franchisees are investing $6 billion nationwide to modernize restaurants by 2020, the company said.

“Times change and you gotta change with the times,” Telischak said.

While the East Palestine restaurant’s dining area will be closed during the project, the drive-thru will remain open during normal hours, which are 5:30 a.m. to 11 p.m., he added.

Work is being done by Max Construction out of Pittsburgh, and Telischak said he is pleased with how fast the work is getting done so far.

The company completed the Salem restaurant remodel within 17 days, he said.