EAST PALESTINE — A former Glenmoor firefighter who has earned the reputation of “The Puzzle Man”in the village has donated money for new firefighting gear for the local department. 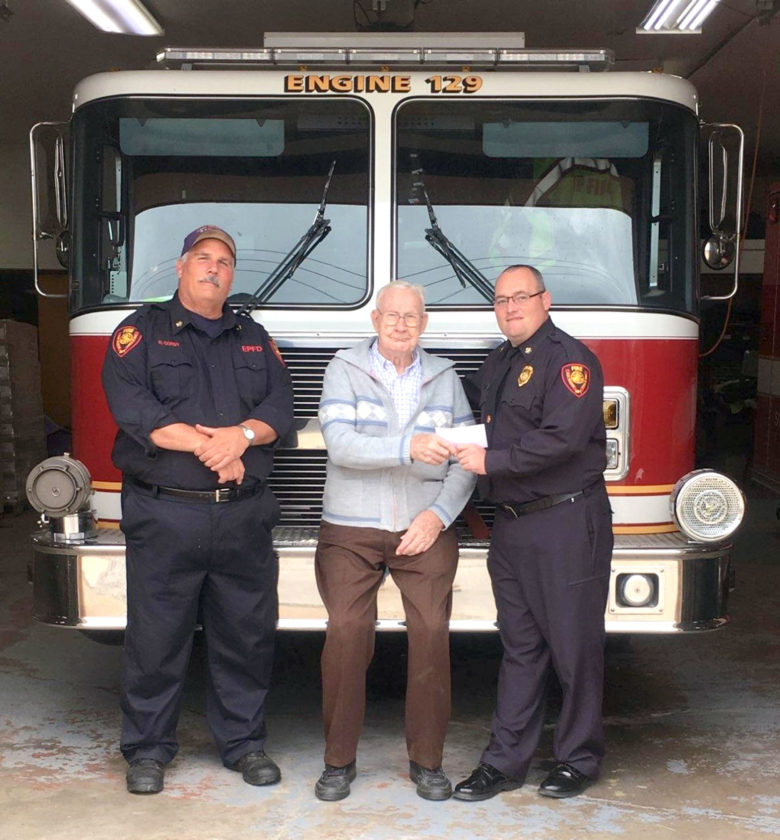 David Butler, who turns 92 next month, served on the Glenmoor department in the early 1960s up to the 1980s. His first experience with firefighting was for the Navy Seabees in China from 1945-1946.

Butler said firefighting has changed tremendously over the years thanks to new technology and equipment not available back then.

He also said there is a lot more training now.

One thing that has remained the same, however, is the camaraderie among firefighters, he said.

Originally from East Liverpool, Butler moved to East Palestine in 2002.

For his birthday last year, his daughter, Cindy Butler Fletcher, gave him some jigsaw puzzles, which he began piecing together at alarming speed.

Fletcher turned to Facebook after her father breezed through those puzzles to see if anyone had any puzzles for him to complete.

His skill at the hobby quickly turned into an international sensation, with people from all over the world sending jigsaw puzzles in to be completed.

He just recently completed a 2,000-piece puzzle of a place in Italy that took about 10 days to finish.

“This one was a struggle … you can’t work on it all the time, you can come back. You have your life to live, you just can’t live on that puzzle,” he said.

Generally, he can complete a 1,000-piece puzzle in two days.

As Butler’s puzzles became more popular, people began to offer money for the puzzles to hang as art. Butler and Fletcher have taken that money and donated it to local causes, like the emergency kits for the East Palestine school district, and now the fire department.

Fletcher is also a retired firefighter from Anadarko department in Oklahoma.

“No strangers to the fire service, David and Cindy are well aware that frequent exposure to carcinogens when fighting fire that may then sit around contaminating their gear and equipment has led to a higher rate of cancer within the fire service,” East Palestine Fire Chief Josh Brown said.

The department was able to take their $500 donation and purchase two flame and heat resistant Nomex hoods for each firefighter on the department.

Brown said that with the hoods currently in use, the purchase of the additional hoods will help enhance a department cancer prevention program.

He explained that in addition to gross decontamination by hosing off equipment before returning to the station after an alarm, firefighters will conduct a gear exchange with Nomex hoods and gloves. Contaminated hoods and gloves will be placed in a sealed bin and firefighters will take a clean hood and pair of gloves from an additional sealed bin. After returning to the station all equipment will then be thoroughly cleaned and decontaminated before being returned to service, he said.